From April 23th to 28th the European Geosciences Union (EGU) General Assembly is taking place in Vienna, Austria. WaterInnEU will be present there represented by 52N. In the session ESSI2.2 Metadata, Data Models, and Semantics of Thursday, April 27, Cristoph Stasch will be explaining An Approach for harmonizing European Water Portals (11:00h -11:15h), a work developed within the project with collaboration of CREAF, 52N, Eurecat and Semantic Web.

WaterInnEU is promoting its 2nd Marketplace E-pitch event on February 7th. Are you interested in new innovations and would like to hear from the product owners themselves? Then join the next 2nd Marketplace E-Pitch Event on February 7th 2017 at 14h CET. In a 1 hour session, short presentations will be made by product developers who have newly joined our platform in a web based event which gives you the opportunity to ask questions and receive answers directly from the product developers themselves.

"Technology, telecommunications and territory. In the service of society and of the people" Event

Telecommunications and ICTs continue to be the driving force behind the current development towards the Information Society and Knowledge of our country. The aim of this conference is to reflect and report by first-hand the status of infrastructure, services and innovative projects that provide ICT and technology in general. 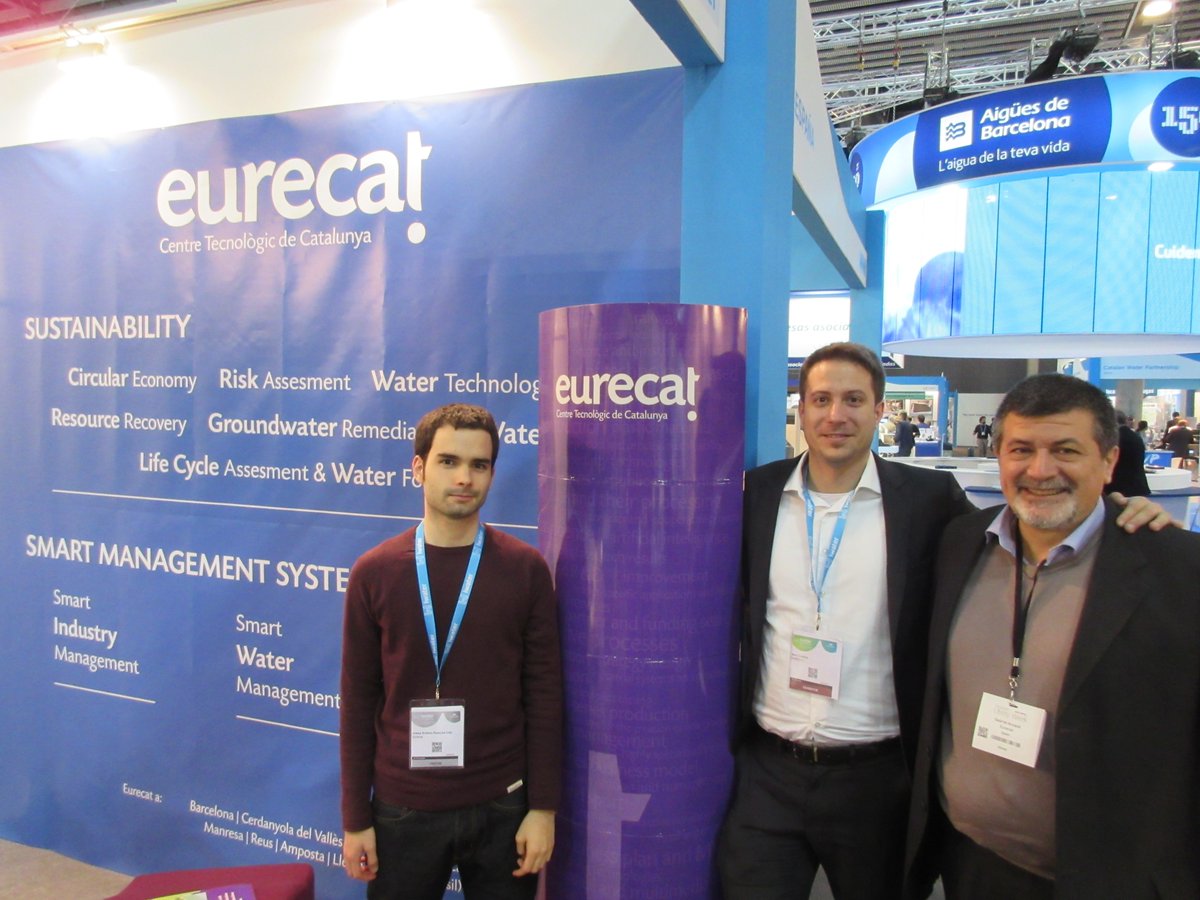 In its first edition the iWater 2016 closed the event with 4.562 registered people and almost 250 presenters, which have positioned the event as the reference in southern Europe as the meeting point for professionals about water management. Along the three days of the event, Iwater 2016 sessions have become a meeting and debate point of the current crucial moment to face the future challenges with an integral vision of the whole water management system at national, European and World Wide level. 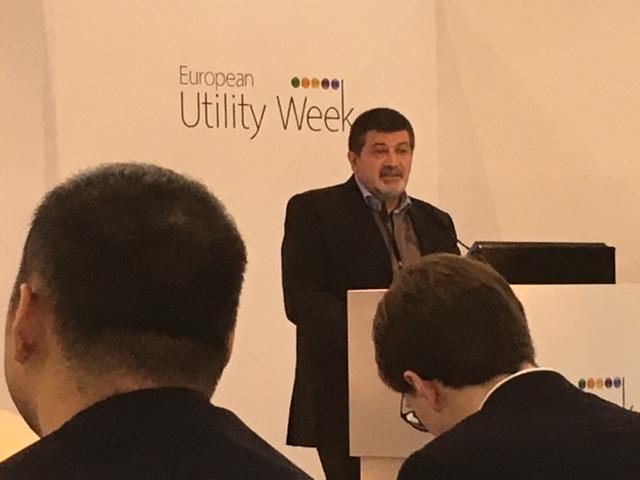 The event has served as an annual meeting point for the community and has been attended by 12.000 international visitors, 450 speakers and 600 exhibitors. Innovation underlines every element of the show with a special focus on connecting people from all levels of the utility value chain from technology giants to start-ups and from senior-level experts to young talent. 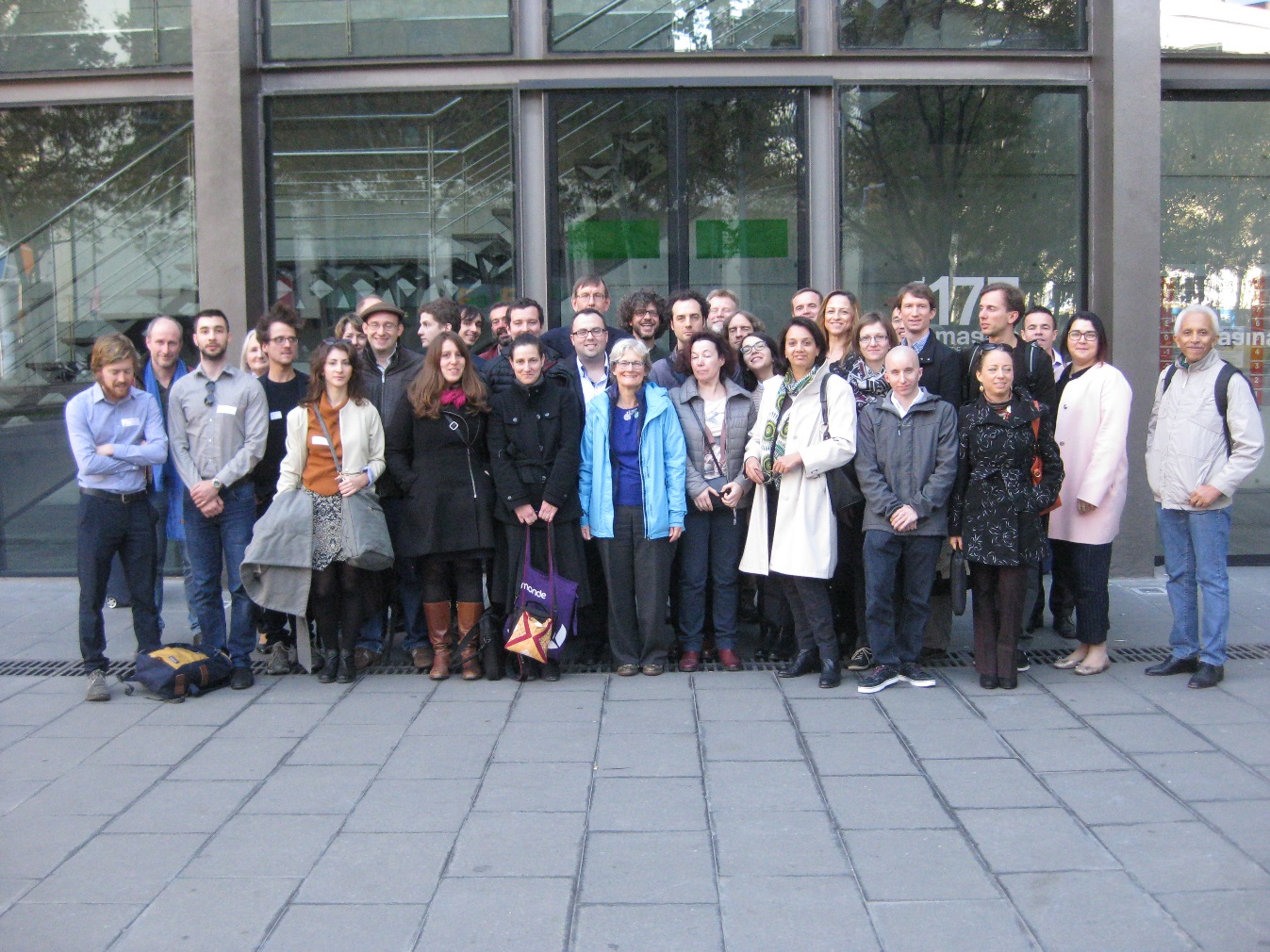 ICT based tools for the Nexus concept Workshop

More than 40 researchers from SIM4NEXUS project have been discussing and working in the development of ICT tools for the development of the NEXUS in Eurecat (Barcelona) facilities, taking advantage of the coincidence of the Iwater Conference and the European Utility Water Week.

Eurecat-CTM (the Technology Centre of Catalonia) organised the LIFE Projects technical conference: Water, waste and circular economy on 8 November 2016, at their facilities in Manresa (Spain). The aim of the conference was to publicise the achievements of 12 LIFE projects working in this area, and to offer an opportunity to network and share experiences.

Globally, the agricultural sector consumes about 70% of the planet's accessible freshwater – more than twice that of industry (23%), and dwarfing municipal use (8%). One promising field within ICT that may help to decrease the consumption of fresh water in agriculture is precision agriculture.

BlueSCities is a H2020 project and part of the ICT4WATER Cluster that aims to develop the methodology for a coordinated approach to the integration of the water and waste sectors within the 'Smart Cities and Communities' EIP. It will identify synergies in accordance with the Smart City context and complement other priority areas such as energy, transport and ICT.

Special Issue of the Water Journal

The relevance of water in human development and sustaining life fuels general and scholarly interest in the world's water resources. A better understanding of all aspects of water and its relation to food supply, energy production, human health, and the functioning of ecosystems is key in managing this precious resource in a sustainable, efficient and equitable manner.

The WISDOM project has developed and tested an intelligent ICT system that enables “just in time” actuation and monitoring of the water value chain from water abstraction to discharge, in order to optimise the management of water resources

As the ideas for tackling water shortages and climate change dwindle in cities, decision-makers are being encouraged to seek advice from young people to catalyse new thinking in management approaches and research areas.

WIDEST participated to the Open Workshop

Symposium and Summer School on Smart Systems for Water Management

The Symposium and Summer School on Smart Systems for Water Management was held in Monte Verita - Switzerland between 22nd and 25th of August. The event was scheduled by SH2O with an active support and participation of WIDEST and the ICT4WATER cluster.

This workshop for and by Young Water Professionals (YWPs), is developed by the International Water Association on behalf of the partners of WIDEST, a European Commission project, which aims to establish an interconnected ICT for Water community. 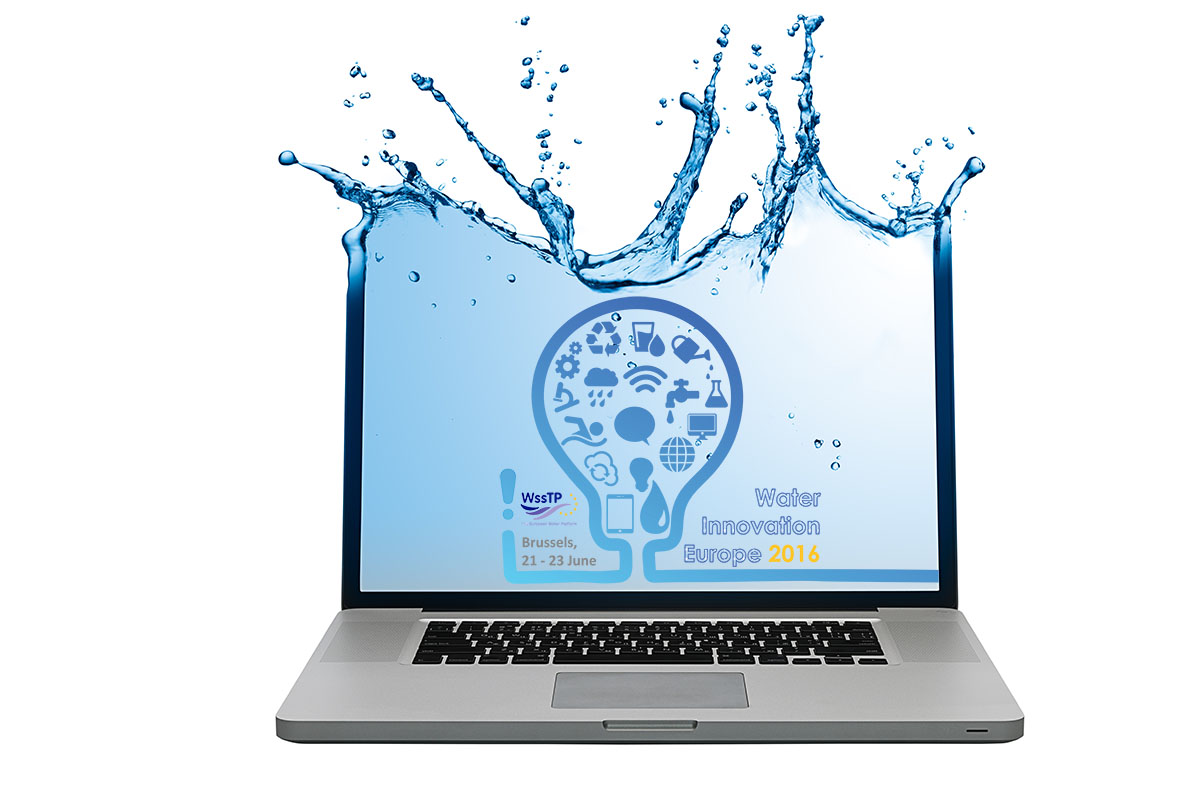 “Water does not only have a great value for human health and well-beings, but it also drives job creation and economic growth in a society. The Sustainable Development Goals on water clearly reflect the value of water for our present and future.”

IWA LET 2016 has brought together more than 450 participants, of which about 200 are Spanish, from nearly 50 countries around the world, among which there are the United States, Australia, New Zealand, Japan, China, Korea South, South Africa, Singapore, Israel, Hong Kong, Chile, Egypt, India, Mexico, Brazil, Cuba, Slovenia and practically all European countries.

WIDEST organizes this Friday THE “AQUATHON”

This Friday May 13, Cetaqua Andalucia in collaboration with the University of Granada and EMASAGRA organizes a hackathon called "AQUATHON". In this event, held within the framework of the project WIDEST, 30 students from the University of Granada will compete in groups to develop, in 8 hours, innovative software in the customer area that aims to identify groups at risk of social exclusion struggling to deal with the water bill, responding to the current socio-political context. 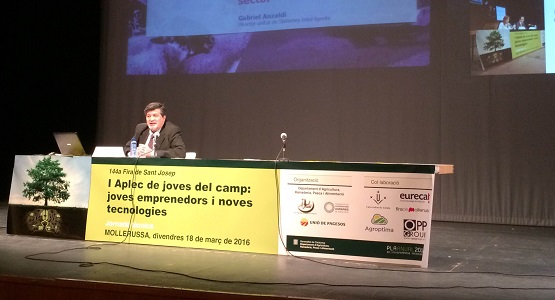 The generational change in the food industry represents a growing trend in recent years, as more and more young people that want to work in this sector see an option for the future and a chance to improve life quality. This was stated this morning by the Counsellor of Agriculture, Livestock, Fisheries and Food, Meritxell Serret, during the inauguration of the first “Aplec de joves del camp”, forming part of the 114th edition of the “Fira de Sant Josep” in Mollerussa.

A number of international environmental and water platforms have a series of work groups which permit their members to participate in actions, international project proposals and to foment collaboration and improved transversal synergies. It is important to understand that the Communities will not compete with work groups established by other water platforms but will aim to provide a SOCIAL complement to the TECHNOLOGICAL objectives of their counterparts.

A new project "Sustainable Integrated Management FOR the NEXUS of water-land-food-energy-climate for a resource-efficient Europe (SIM4NEXUS)" has been selected by the European Commission to sign a Grant Agreement for an overall grant of nearly € 8,000,000. The project, which involves 26 partners from 15 countries is led by Wageningen UR (The Netherlands), will start in May 2016 and run for 4 years.

The 3rd EIP Water Conference on 10 February 2016 in Leeuwarden, The Netherlands, provided a thought-provoking and pragmatic exchange about innovation and how innovation partnerships in general, and specifically in the water sector, are progressing in Europe. Take five minutes to watch diverse insights from speakers and participants and hear what they said about the challenges of driving innovation in the European and global water sector. 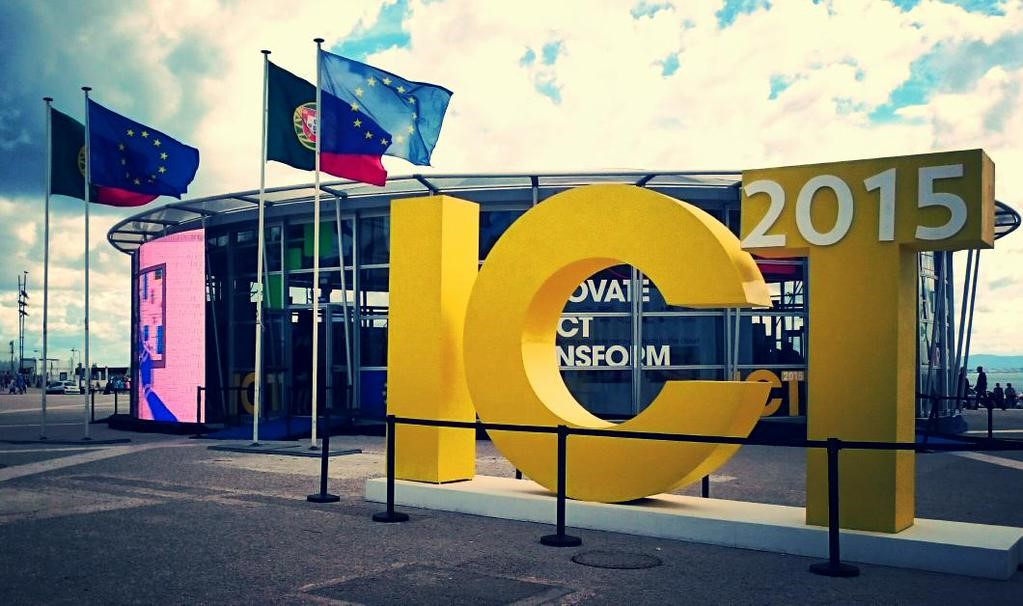 On 18-22 October 2015, WIDEST, a H2020 CSA coordinated by Eurecat, was present in the ICT2015 event in Lisbon. This event is organized by the EC, and most relevant research and business players in the ICT field were present.

Through activities, the exceptional congress featuring world renowned speakers, and popular side events, the SCEWC attracts thousands each year, making it consistently the top event for exhibitors and visitors alike. The SCEWC seeks to give everyone involved the chance to be inspired, share experience and knowledge, strive for innovation, network and do business.

INCLAM participated in the ICT4Water Open Day, where how they translated the SMART concept in actual savings for water managers was exhibited.

Latest edition of the EIP Water newsletter presents a multitude of news items on innovation in the water sector collected over the summer - including some good news from Greece, innovation at the recent World Water Week, the city blueprint of Ho Chi Minh City and others. The ICT4Water Open Day is also included in this compilation.

During last 20th and 21st of September, WatERP and WIDEST partners have participated on the Hydro-Domain Working Group workshop. The workshop was aimed at establishing next steps in the development of the Open geospatial Consortium with the focus on the hydrologic standards.

Last 17th of September, the water projects granted by the European Commission during 2014 under the European Horizon 2020 Research Programme were illustrated, by their coordinators and partners. These five on-going projects are related to water use and consequently they concern groundwater too. In some cases, groundwater is the main topic developed by projects. 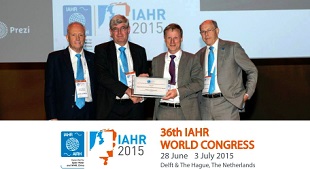 WIDEST participates in the IAHR 2015

On June 30th, the 5th General Assembly of the Spanish Water Technology Platform (PTEA) took place in Madrid. This assembly was organized in two round talbes. One of them was focused on the funding lines available for the water field. The second one was devoted to success cases in the funding of water projects. WIDEST project, was one of those cases presented to the assistants.

WIDEST Participates in the Hydro DWG Session in Boulder

On June 3rd, WIDEST partners participated in the Hydro DWG session. This session was motivated by the establishment of near-future steps in regards to the OGC standardization, OGC best practices and OGC-Test-Beds. In detail, the meeting was focused on evaluating the plans and progress of HY_Features, Groundwater IE (Evaluation of the progress report), TestBed 11 "High resolution Flood Information Scenario Engineering Report", WaterML2.0 part2 (RestFul API and JSON) and Timeseries ML.

After the workshop on the 18th of March, coordinators from water projects funded under the FP7 and H2020 programmes met in Brussels. WIDEST project was one of the projects assisting and participating in the cluster meeting. The following day, a water cluster meeting took place, involving coordinators from ten FP7 projects and five H2020 projects. Officials from the EC and EASME also attended the meeting. As well as participating in the meeting, WIDEST was the chair of the meeting as one of the Horizon 2020 Water4a funded projects.

As a CSA, WIDEST is going to implement a series of coordination and support actions that will benefit several EU funded projects. WatERP is one of those projects which has already benefited from WIDEST activities.

On 13th March 2015, the Interoperability Day, a national/regional event with the aim of discussing OGC standards, took place in Barcelona. It was organized by the Foro Ibérico y Latinoamericano del OGC and the Asociación Catalana de Tecnologías de la Información Geospacial (ACTIG). It brought together projects involved in the implementation of standards.

WIDEST project (Water Innovation through Dissemination Exploitation of Smart Technologies) started its activities on February 1st, 2015. On the 23rd and 24th of February, the WIDEST project held its kick-off meeting at BDigital's premises in Barcelona. For two days, representatives of all partners reviewed the project work plan and established common criteria for carrying out the activities so that the achievement of the Coordination and Support Action's objectives is ensured.